This week’s Quote of the Fortnight is from Michael Crichton’s novel, A Case of Need, originally published under the pseudonym Jeffrey Hudson. Published in 1969, the novel won an Edgar Award and is one of the first books to argue for the legalization of abortion, four years before the landmark Supreme Court case Roe v. Wade that established guidelines concerning the procedure. The novel also contends with the ethics of medicine and the burden it places on the caregivers, as established by the following quote from the book’s final pages.

“This particular ambulance had its light flashing, but the siren was off, and it moved with almost casual slowness. That meant the passenger was not very sick.

Or else the passenger was already dead. It was impossible to tell which.

For a moment, I felt a strange, compelling curiosity, almost an obligation to go to the EW and find out who the patient was and what the prognosis was.

But I didn’t. Instead I walked down the street, got into my car, and drove home. I tried to forget about the ambulance, because there were millions of ambulances, and millions of people, every day, at every hospital. Eventually, I did forget. Then I was all right.” 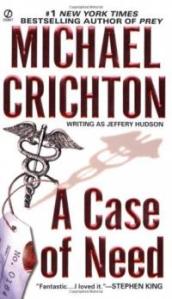