This post is the first in a new blog series about film’s interpretation of cities.

The central plot of Spike Jonze’s Oscar-nominated film gets most of the attention in the media: Joaquin Phoenix’s character falls in love with his operating system, a self-aware “Siri” voiced by Scarlett Johansson. While this plot was compelling, what I found most fascinating about Her was its design. And though Phoenix’s high-waisted pants and collarless button-downs are already gaining trendiness (Read about this here: http://www.theguardian.com/film/2014/jan/06/her-joaquin-trousers-sale-pants), what’s most interesting is Her’s vision of future Los Angeles. What Jonze’s LA appears to be is a striking combination of Le Corbusier’s “Radiant City,” Smart Growth, and gentrification. 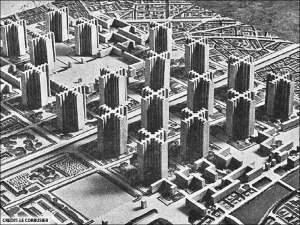 French-Swiss architect Le Corbusier proposed the plan for a “Radiant City” (La Ville Radieuse) in 1924. His utopian plan involved high-rise housing blocks sitting on a vast mall, with an emphasis on circulation. The plan has been criticized by modern planners, such as Lewis Mumford, as evoking “buildings in a parking lot,” alienating civilians and preventing meaningful conversations between buildings.

Many of the shots of Downtown LA in Her involve Phoenix looking down from his high-rise apartment at the city below, which features a lot more high-rise apartment complexes than there were in Downtown the last I checked. This proposes that Downtown LA will become much more dense, (and therefore more sustainable, following the principles of Smart Growth), meaning that more revitalization should happen in the urban core of the vast, sprawling metropolis. The fact that Phoenix’s character lives in Downtown proposes that a trend of urban renewal and gentrification will come to fuller force in the future.

A prominent image of the film is Phoenix’s strolling to work on elevated walkways, which directly evokes the Radiant City, as functional circulation is removed from the ground, so that even walking paths appear as freeways.

Los Angeles’s Metro rail system is also highlighted in the film, currently an underutilized and underdeveloped service. As noted in the book and exhibit at the Architecture and Design Museum of Los Angeles, “Never Built: Los Angeles,” the City had planned rapid transit systems in the 1920s and 1930s, (and later monorails and “people movers”), only for the plans to be scuttled by automobile and oil company lobbying. The current Metro rail system began in 1990, and is gradually adding lines and stations.

The nightlife in Downtown appears to be relatively active in Her, suggesting that gentrification has caused high-income, young urban professionals to occupy the urban core (unaddressed in the film is the plight of the poor on Skid Row who might have been displaced by the yuppies, compounded by the fact that the 50% of Hispanic/Latino population that currently live in Los Angeles are very much nowhere to be seen in the movie (For more on this: http://www.indiewire.com/article/spike-jonze-why-are-there-no-brown-people-in-your-future-los-angeles)). Removing significant diversity from an interpretation of Los Angeles poses alarming questions – is Spike Jonze’s LA only for upper-middle class whites? This vision of the future is the polar opposite of Neill Blomkamp’s Elysium, whose LA resembles the Apartheid shantytowns of South Africa and the favelas of Rio de Janeiro. Spike Jonze’s LA, then, proposes a varation on the archaic, 1950s, Jetsons vision of the future which only entails advances for whites.

Los Angeles’ urban core has been dead for a long time – and though Her proposes urban planning developments of the future, Phoenix’s Theodore Twombley is lonely as ever, driving him to romance his intelligent computer. Is Los Angeles as Radiant City a good idea? Or is it another way that the City of Angels will alienate its population, driving more to live further in the outskirts and the far-reaching suburbs, while displacing lower-income citizens and so-called ‘minorities’?

For more on this topic, check out my sources for this article:

Artsy’s page on Le Corbusier is a great starting point for learning about Le Corbusier’s work and life: