Last week at Comic-Con, the second trailer to Catching Fire was released. Everyone’s favorite reality show-to-the-death is getting a cinematic sequel—based on the second book in Suzanne Collins’ trilogy. Unfortunately, the second book of The Hunger Games is pretty boring in the first act, filled with adolescent angst and Katniss’ inability to choose between her two suitors, the morally superior Peeta or the hunky hothead Gale. Yawn.

The second book hits its stride when—well—the Hunger Games happens again, and guess what? Peeta and Katniss have to compete against previous winners of the tournament. Though the second book relies on the formula of the original, when the third book falls flat it’s because there isn’t a Hunger Games in it. Similar to the pattern of The Hangover movies, in which the sequel repeated the exact plot while upping the ante, the third fell apart because it actually tried to do something different.

While we can all hope Catching Fire succeeds, it’s time to face up to the fact that The Hunger Games isn’t an original idea. Sure, teenagers killing each other for the sake of upholding a suppressive government while satirizing the antics of reality television and game shows sounds great on paper, but in reality has been done many times before, especially in the world of young adult (YA) fiction.

Here are five books published before The Hunger Games trilogy that feature some or all of the aforementioned qualities. In some ways, they surpass Suzanne Collins at her own game. (Okay, that pun was intended.) 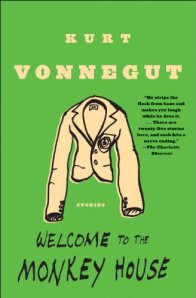 Okay, this one isn’t a book, but a short story collected in the book Welcome to the Monkey House. It is one of Vonnegut’s best short stories, an effective glimpse at his satirical but sobering style which would come to full fruition in later works like Slaughterhouse-Five, Cat’s Cradle, and The Sirens of Titan. In the Cold War story, Colonel Bryan Kelly is forced by a Fu Manchu-like character, Pi Ying, to play a game of chess. Except this time, Kelly’s men and his family are forced to act as the players in the game, and if they are “taken,” Pi Ying orders them to be shot. A life-or-death game of chess acts as a real metaphor for the Cold War, and effectively acts as a precursor to the game of chess in Harry Potter and the Sorcerer’s (or Philosopher’s Stone). Definitely worth checking out. 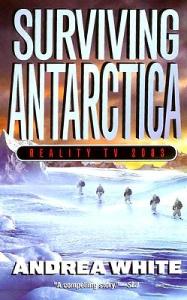 This YA book beat The Hunger Games to the press by three whole years. Written by the former mayor of Houston, the world of Surviving Antarctica is an unforgiving place. America is in full-fledged dystopic decline, overwhelmed by poverty and obesity. The Department of Entertainment has become the most important branch of the executive government, and kids rely on meal-flavored potato chips for their daily “nutrition,” and watch “educational” television programs instead of attending school. The educational programs, however, are taken to the extreme, reenacting historical battles but with real bullets and deaths. In the novel, five teenagers are selected to participate in a reality TV show where they reenact Robert F. Scott’s failed attempt to reach the South Pole. It’s no fun and games, however—this book is really bleak for YA. But it’s often overlooked—even though it was published by Scholastic, which also published The Hunger Games. It’s thought-provoking, everything a kid might want from a YA book.

A little background—this is the seventh book in a ten-volume YA series. In the series, the teenage Bobby Pendragon is a Traveler, and in each book he journeys to one of the ten “Territories” (or planets) in the universe in order to make sure a turning point on each Territory swings for the good and progress of society (usually involving the unification of a ruling class and a labor class). His adversary is Saint Dane, whose goal it is to swing each Territory to chaos, totalitarianism, and classism, while also making the Territories more homogenous in culture and technology (in a jab at globalization). Bobby travels to desert planets, medieval planets, 1940s New York, and water planets, but seems to meet his match once he reaches Quillan, a dystopian world. On the planet Quillain, a multinational corporation named Blok (think Wal-Mart) has taken over the world. Blok controls all supplies and demands and has superceded the power of civilian governments. As a result, citizens are forced to work for the corporation, or be sent to work in a nuclear power plant, where they will die an early death. The only chance for social improvement is by betting on The Quillan Games, which often leads to the death of its competitors, but is eerily similar to the scenario of The Hunger Games. And, no surprise, Bobby has to compete in the games. While the Pendragon series is notable for its scope, this volume is strong in itself. I’d recommend reading all ten, but if you just pick up this one, that’d be all right, too. 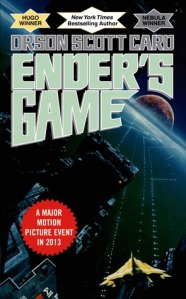 Ender’s Game is arguably the most famous book on this list. Soon to be released as a feature film, this book takes place in the near future when an alien invasion nearly wipes out the human race. As a result, the newly formed International Fleet constructs a space station to train future officers in the delicate art of war in space. Ender Wiggin, a boy genius, goes to Battle School and becomes a successful commander among his peers during their zero-gravity battle simulations. Ender goes on to Command School, and from there—the war itself. Ender’s Game is classic not only because it sets up other YA novels centered around a magical or fantastic school (Harry Potter, Percy Jackson), but it sets up other situations as utilized in The Hunger Games. Some may criticize that the students are far too young and far too smart to act the way they do in the book, and they are right. The kids are too young to be acting and thinking that way. If you just ignore the implausibility, then you can enjoy it.  In some ways a rebuttal of the gung-ho fascism advocated by Robert Heinlein’s Starship Troopers, Ender’s Game deserves its place near the top of its list.

Battle Royale is the granddaddy of them all. Inspiring the Japanese film that was not released in the U.S. because of the Columbine tragedy, Battle Royale lays out all the elements of The Hunger Games years before Suzanne Collins handed in her first draft. In a world where the oppressive Republic of East Asia (think how Japan might have become if World War II didn’t happen) selects a ninth grade class in EVERY prefecture (so it’s like a Hunger Games happens in every COUNTY in the United States) to fight to the death in an event called the Program. While it isn’t a reality show, senior officials in the government bet on the results. And if you thought the Hunger Games was intense with 24 competitors? There are 42 students in Third Year Class B, and nearly all of them are developed in a somewhat fulfilling way. And by the way, while The Hunger Games takes about a third of its respective book, the whole book is the Battle Royale. This book is exploitive, violent, and dark. Antics and manic dialogue by the administrator Sakamochi make the book feel like a Quentin Tarantino film at times, and it is reminiscent of John Carpenter’s book The Thing for its sense of the mutual suspicion the students share. Moreover, the book’s countdown of students makes it all the more chilling and un-put-down-able. Hampered by some lazy writing (or poor translation), the book is a little clunky at times, featuring some of the implausibility of Ender’s Game when you consider the kids’ age and the fact that half the students are already involved in gang violence, prostitution, and intense love. But it truly is the founding pillar of the YA game-genre. And for that, it’s gotta be number one on this list. And once you read the book, see the movie, currently available on Netflix and Amazon Instant Video. It’s like a Stanley Kubrick movie and a Quentin Tarantino flick had a baby. No really, it is that good.

Honorable Mentions: Only You Can Save Mankind, Terry Pratchett; The Long Walk, Stephen King.

What’s your favorite of the list above? Do you have another book in the same vein that tops the Hunger Games? Comment below!